Having studied Media Technology in Amersfoort, it was inevitable that I would at some point create something based on the work of the city's most famous inhabitant, Piet Mondriaan. Surprisingly, that moment didn't arrive until four years after graduating, when the local association for the development of the creative industry launched an art projects based on one of Mondriaan's works. I ended up joining the project together with three friends and fellow Media Technology alumni.

The art projects focused on the painting Victory Boogie Woogie. Although unfinished, it is known as one of Mondriaan's best works, and is widely assumed to represent the dynamic feeling of Manhatten (where Mondriaan was living in the years before his death). The art project's goal was to challenge the creative industry to reimagine Victory Boogie Woogie and make it actually dynamic. The entries would be displayed during an exhibition. 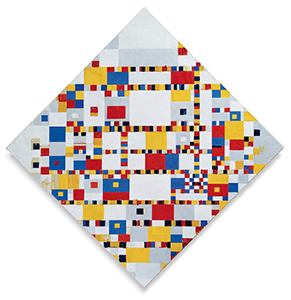 Victory Boogie Woogie (the real one)

The technology for this kind of thing has been available for years. Technology for movement tracking in general and head tracking specifically can be found for many different technology platforms, and can be found in consumer electronics like the Wii. Our main challenge was to connect this head tracking to the painting. The real painting consists of several layers, and we had to painstakingly extract every element from every layer, and describe how it should respond to people's head movements. This may not seem like a lot of work, but if you take a closer look at the painting you'll quickly find out just how many elements there are.

In the end, we ended up with something that looks exactly like the original painting when you first look at it, but then changes shape as it follows your movements when you walk past it. This creates a nice effect when you see the surprise on people's faces when they first notice the movement, and then the enjoyment when they figure out what's happening.