In 2005, the Dutch media sector launched IMMovator: an innovation network focusing on multimedia and "cross media". The idea was similar to a business incubator, located at the Dutch Media Park, where startups and students from various disciplines can work together on projects. Results were shared with other participants in regular "Cross Media Cafe" sessions.

I participated in this network for 6 months during my study in Media Technology. The novelty was that you're working on what is effectively a student project, but with a group of students that all have different backgrounds.

Flash animation was very popular at the time, so we decided to make a mobile app to create animations and share them with your friends. That idea would not be very exciting today, but at the time mobile apps were extremely novel. It was technically possible, but lack of standardization and limited resources meant basically nobody bothered.

We eventually got the app to work, albeit on a very limited number of phones that met our very specific requirements. We presented our app during one of the Cross Media Cafe sessions. Since those sessions were public, our app was covered by a number of blogs covering the emerging mobile app industry. 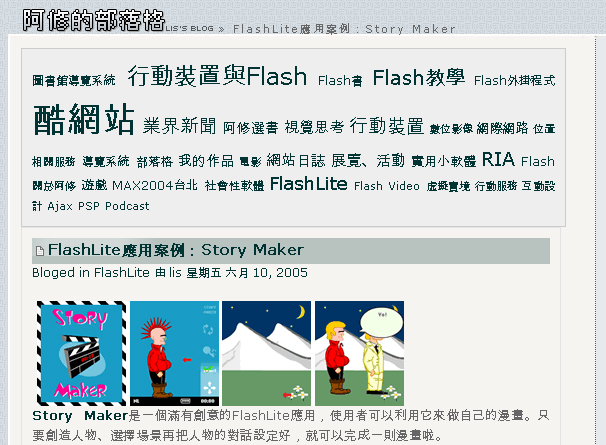 Story Maker featured on a Chinese blog, somewhere in 2005